In pillar 5 of the Go-To Therapist pillar system, you have reassured the patient’s nervous system locally that it is safe to tolerate a load in some particular direction.

We now want to further expose these tissues to absorbing force and deal with it effectively in partnership with its muscle synergies, and to distribute this load through the limb and not excessively in one particular place.

Such an example of this may be absorbing excessive load in the hamstrings, whereby the hamstrings cramp when performing a single leg bridge for example. I would very much view this as a protective response from the nervous system.

The use of a submaximal isometric exercise is the next logical progression to exposing these tissues to load, an opportunity to overcome muscle slack while also potentially undoing any fascicle length changes within the local tissues.

Most importantly this will also help restore the nervous system’s ability to generate a force along these tissues, dampen it with the tendons and spread it throughout the body more efficiently.

The use of an isometric is to simply continue to expose the tissues to load but give an opportunity/environment for the nervous system to coordinate this process while in a state of ‘rest and digest’.

The ‘Go-To’ Therapist will achieve this by integrating respiratory desensitisation techniques here to ensure the person is in ‘rest and digest’ while restoring the ability to generate tension at submaximal levels. This exercise is not a max strength isometric but rather a submaximal and gradual build in pressure which will bring the patient’s conscious awareness back to these body parts and restore control at submaximal levels.

The critical point here, however, is that the loading of these tissues is in the direction that we have identified from pillar 2 and is the next natural progression of loading from pillar 5.

Although some therapists believe exercises do not need to be specific and the benefits are non-specific, from my experience the ability to load certain parts of tissues can massively accelerate the patient’s confidence and movement capabilities whereas just doing the isometrics do not achieve this.

An example of this would be seen in the image below. 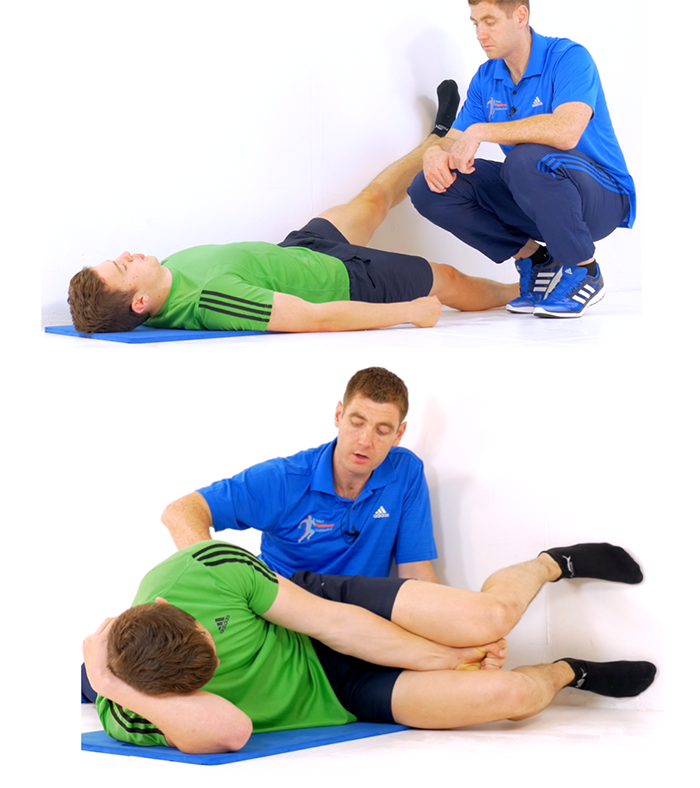 The exercise choice you would use would be dependent on the assessment findings, specifically from pillar 2.

Whenever there is an opportunity to load a tissue isometrically, I like to make use of the ability of the nervous system to coordinate this loading with muscle synergies and antagonists by utilising the hand or foot also.

Using these joints will also help coordinate the tissues that will usually be working together in real life and will add more problems and meaning for the nervous system to figure out, in my opinion.

For the upper limb, the ‘Go-To’ Therapist would send the load through the fingers and wrist first in a certain direction to get the cuff and trapezius muscles, for example, working in coordination with the hand, wrist and elbow joints.

For the torso, the ‘Go-To’ Therapist would spread the load through both the hands and feet, as required, in the given directions.

This process is not long as we do not complicate this process. The aim of pillar 6 is to simply continue to give the tissues an opportunity to tolerate load in a ‘safe’ environment, ideally while coordinating with the other joints in the limb.

This step would happen immediately after pillar 5’s hands-on treatment for an area and would usually utilise about loading for 6-8 breaths for about 6 seconds each rep.

Now you have the foundation, in part 2 we can begin to delve deeper into restoring load tolerance.