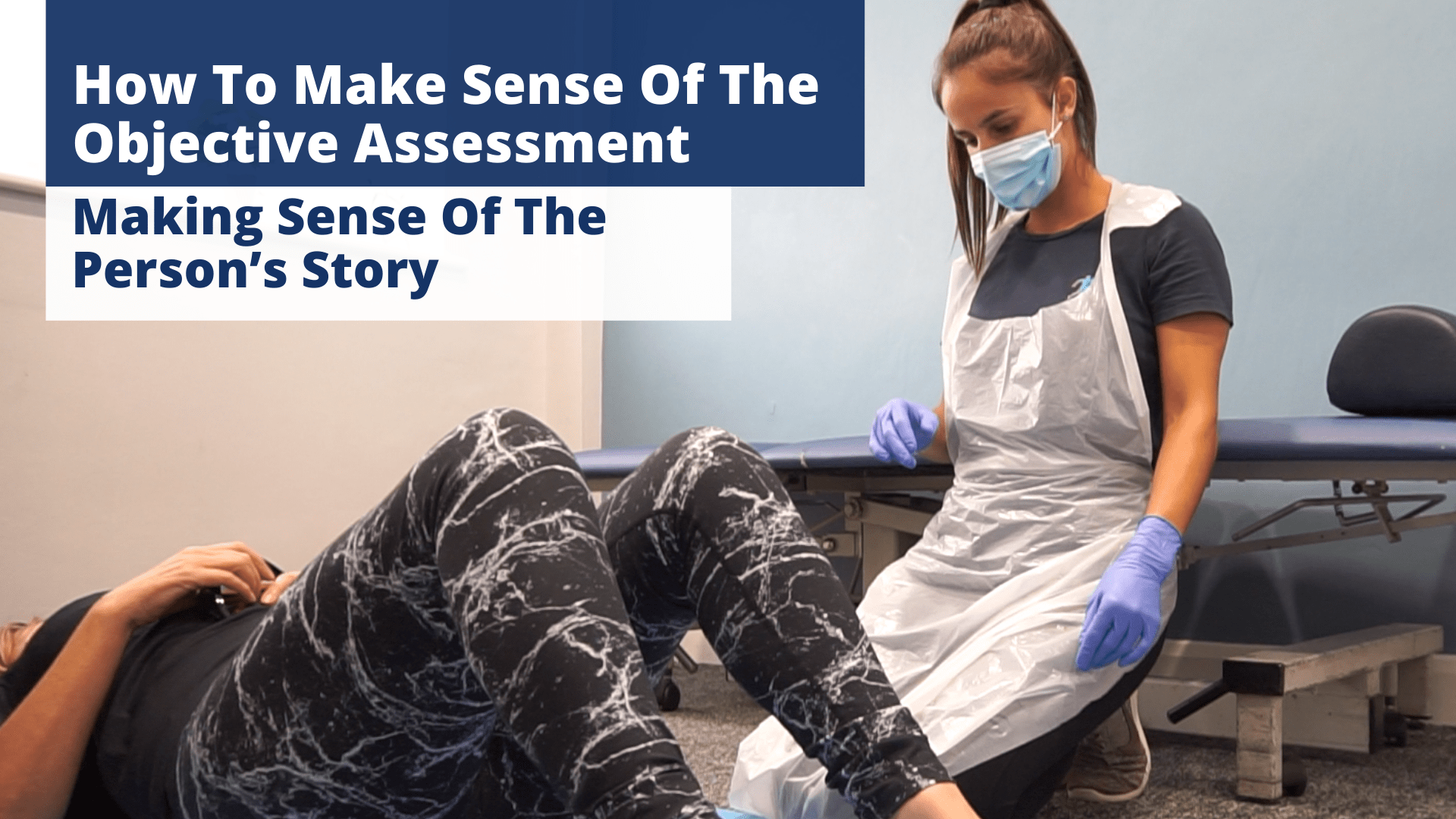 We use the ‘3 Layer Approach’ in the objective assessment to gain clarity on what needs ‘undoing’ to help with the symptoms and what we must help the patient get back to ensure that the problem does not return again.

The value in using the ‘3 Layer Approach’ above in addition to the ‘Stressor and Story Method’ in the subjective assessment is that as you progress through the assessment you are building a stronger and stronger hypothesis of where to start your treatment plan.

The REAL VALUE, however, is that if you have missed something in either the subjective assessment or one of the layers, then the other layers don’t usually make sense as you progress through the objective assessment, and so you won’t end up on a wild goose chase, taking your patient’s rehab plan in the wrong direction.

A really quick example of this happened to me personally when working with a professional golfer a few years’ back. The patient came to see me with a right-sided meniscal tear that was stable and he was managing OK until the end of the season. In his history he was only ever mentioning his right side (an old ankle sprain) and denied any issues with his left leg.

There was no known mechanism for the knee pain and it came on gradually so I was really struggling to make sense of why this happened and was presuming it may have been down to adaptations laid down by the previous ankle injury. As we headed for the objective assessment, I still wasn’t comfortable with having made sense of his story but we proceeded anyway.

In the objective assessment, he was very protective of his LEFT leg subconsciously from what I saw in the generic assessment which again didn’t make sense with his story. I kept probing him for anything at all that happened on his left leg which he continued to deny.

The next layer, the passive assessment, gave me a better clue about the symptoms and range of motion on both sides but there was nothing remarkable.

It was only when I was putting him on his side for the final part of the objective assessment that I noticed an old scar on the side of his LEFT knee. I asked him about this and he said it happened when he was about eight and he fell backwards through his patio doors in his living room.

The final layer then revealed that he really struggled to coordinate and generate force submaximally in certain directions on this left leg. So now this was starting to make sense and also correlated nicely with what he felt was happening in his golf swing and what his golf coach was trying to achieve with him.

So now I was a lot happier with making sense of the story and working on a hypothesis that there was a protective response or ‘perceived threat’ still present from the nervous system with regards to tolerating loads in certain directions on the LEFT leg.

The treatment plan was also a lot clearer for both of us with some hands-on treatment to desensitise the right knee (20% of my attention) but the majority of my attention (80%) with my rehab would focus on helping the patient reassure his nervous system that it was not only safe to tolerate load at low levels but also high loads at high speeds. We will discuss pillar 6 and this process in further detail later.

The Generic Objective Assessment is now an opportunity for your patient to do some simple ‘big’ movements like touching their toes, bending backwards etc and to gain an appreciation of how they are achieving these tasks WITHOUT trying to diagnose based on just these few movements.

This is the starting point of the objective assessment; we need to go through the other two layers to further strengthen our working hypothesis of the true problem.

In my ‘Go-To’ Therapist Mentorship, I do not actively cue or look for ‘ideal’ movements. What I am looking for mainly is that the movement is done with ‘thoughtless, fearless movement’ (a term coined by the late Louis Gifford) and that they are happy to challenge their base of support subconsciously.

Other clues may be in the form of what the person IS NOT loading in these basic movements. The patient may look over their right shoulder and twist their whole body in this direction and you might notice that they are not putting much weight on the right heel.

Now the right heel may not be the problem; the problem may be that by putting weight through that right heel they are putting a load on certain tissues such as the biceps femoris, for example. Is there a subconscious movement behaviour of avoiding loading an old hamstring injury or of loading certain fibres of muscles as a motor adaptation to pain or a previous noxious stimulus?

Again, this is a working hypothesis and so we would need to make sense of this in the patient’s story and also further justify our hypothesis as we progress through the objective assessment.

APPLIED EXAMPLE; A classic example of this is the toe touch test used by many therapists where at the start of the movement the patient experiences pain in the low back region, similar to a disc-type or SIJ-type presentation. 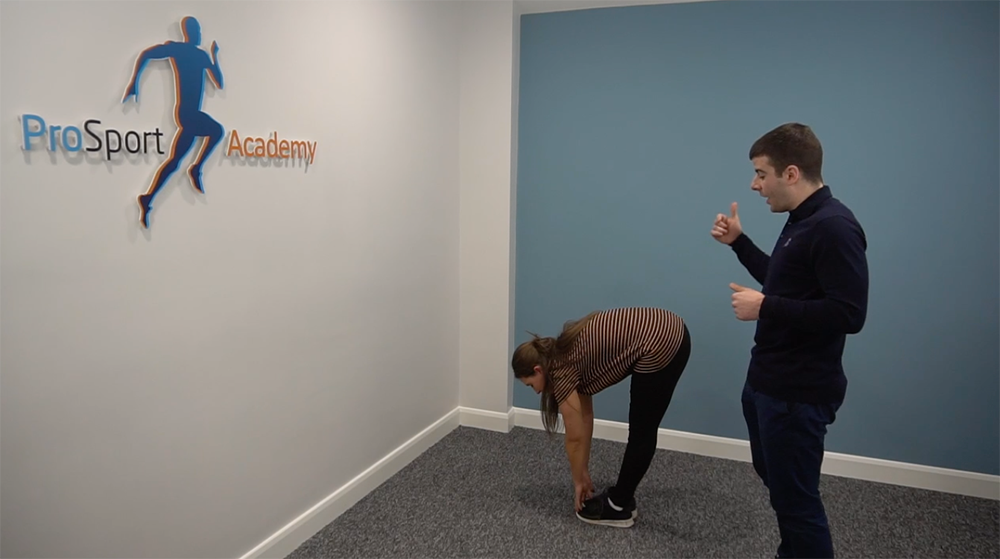 The low back tissues should not be the main ones absorbing the load at this point of the movement and should be starting to relax as the ribcage depresses while the person’s fingertips lead the movement of touching their toes.

The iliocostalis tissues have tendons inserted onto the rib cage and so, as the person’s rib cage depresses anteriorly, the posterior tissues, including the myotendinous junctions of the iliocostalis, lengthen and relax the muscle.

If the person is stiff through the ribcage and not moving it well due to a sensitised respiratory system as a result of ongoing non-physical stressors, could we now be seeing the result of this in the physical form with an adaptation in movement behaviour?

If the iliocostalis tissues are not lengthening but are actually contracting now, is this causing a prediction error for the nervous system? The majority of the load from these tissues generating force will naturally go towards the insertion which just so happens to be around the low back area and the thoracic lumbar fascia.

Obviously, I appreciate this is a theory and working hypothesis as I mentioned, and the iliocostalis may be one such tissue to adapt.

However, remember: clinical reasoning is king and you can cross-reference your working hypothesis with different movements to further check your work.

For example, if you believed the lack of lengthening of the diaphragm (as a result of adaptations of a sensitised respiratory system perhaps) was a major contributor to the pain experience, then you may not expect to see the patient experience pain with a backward bend where the rib cage would be elevating and the diaphragm would not be required to lengthen but to actually shorten.

Therefore rather than just jumping to assumptions based on one movement, the ‘Go-To’ Therapist continues to clinically reason as they progress through the assessment.

At this point of the assessment, you are still only hypothesising and linking together how the respiratory system and the inability of the diaphragm to go through a full range of motion (as research has suggested in those undergoing prolonged stress) may be contributing to movement inefficiency which is ultimately resulting in a pain experience for the person.

There would be further clues in the next two sections of the objective assessment for this particular back pain case that would further strengthen our working hypothesis and would lead to some quick and easy ways to intervene and retest.

The next step in the ‘3 layer approach’ is the passive assessment which can add so much more valuable information to the working hypothesis with some sound clinical reasoning.